Top Scorer for the third time! A. Moryto: This title is a team effort 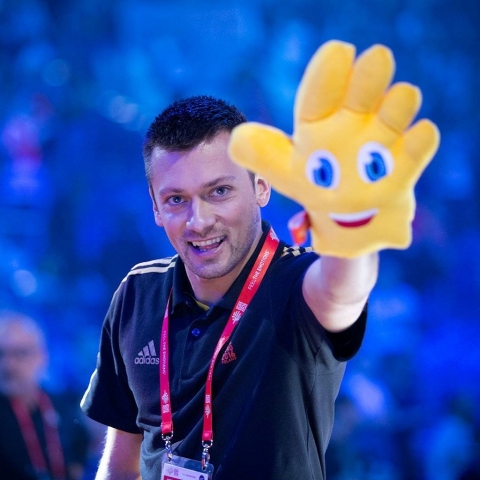 For the third time in a row, the winger of PGE VIVE Kielce became the Top Scorer of PGNiG Superliga. Arkadiusz Moryto earned his first title in his former club, Zagłębie Lubin, and two others already in the colors of the Polish Champions. In this season's games, the player scored a total of 127 goals. Paweł Papaj talked to Arek Moryto in a live stream on Instagram. Below is a record of the most interesting questions, also from the fans who watched the live conversation.

PGE VIVE Kielce: The third consecutive title of the Top Scorer of PGNiG Superliga - a rare feat, considering that no one has managed to pull it off in the 21st century so far (in the previous century it was Lesław Dziuba and Jerzy Klempel). Congratulations!

Arkadiusz Moryto, winger of PGE VIVE Kielce: Thank you very much for your congratulations, but let's remember that this title is actually a team effort. It's the result of how well I worked with my teammates. In matches I often scored from counterattacks, which means that our defense and goalkeeper worked well. I would like to thank my teammates and the fans for contributing to this title.

We can say that the 2019/20 league season was successful, although probably the title of this year's Polish Champion does not bring you as much joy as you would like.

That's right, it doesn't, because we didn't get to play the final match. We couldn't win the championship in front of our fans, in fact it happened somewhere off the court. Looking back at the whole season, you can say that we certainly won most of the league games. Our only defeat was a match against Płock that we lost by one goal, but we won with Wisła by nine at home, so we still showed that in the main round we were the better team and that's why we won the championship.

We are still waiting for the EHF's decision regarding the Champions League. What outcome do you expect?

Everyone would like to play the subsequent games, but the purpose of our playing is the fans. Even if these meetings were to take place, it would probably be without them. We already had such a match with Azoty Puławy and it was a tough experience. In the long run I don't see the sense of playing like this, but it's not my decision. It's not easy for the players in the current situation. We train individually without balls, we are still waiting for the decision what's next.

And the next season's ahead. How to prepare for it at all?

It will be difficult to do the preparatory period for the next season, because first of all we don't know when the season will start. For the time being, we don't know if we're going to play this season, let alone the next one. I can only train on my own, the preparatory period will have to be handled by the coaches. I live a minute walk away from the forest, so I try to run outdoors, there are no people there, so it's safe. I follow all the advice that is currently given to us by professionals.

Do you think that in the next season the Superliga should be expanded with first league game winners?

I think it could be that way, because just as we played all season to win the championship, those teams played to advance to a higher league. I don't know what it would look like financially and organizationally, because it would mean more teams, I don't know what solutions would have to be put in place for the licensing requirements, but besides that I don't see anything against it.

You've been training individually for a week and a half. Do you miss the team already?

I miss having somebody to talk to. Always before training you would go into the locker room, where you could hear the noise of conversations, laughter, discussions, and now we have to split up with the guys so as not to train simultaneously. So I enter the empty locker room and all I hear is the sound of water poured into the shaker.

With whom do you have the best relationship in the team and do you all speak Polish in the locker room?

In the locker room we speak Polish. Obviously, the players who joined this season are still learning the language, but they speak as much as they can. If they can't say something, they speak English or German to Lijek and he translates it. We have a very good team, everyone gets along well. I may have the best relationship with Arczi (Artsem Karalek – editorial note), who sits next to me in the locker room, with Blaž, Lijek, Mati Kornecki, but I really have great contact with everyone.

How do you spend your free time?

I try to cook. I have a machine that helps me - Thermomix, so it's easier. It takes some time, but it's enjoyable, because you always have something nice. Sometimes I also watch series, but I've seen most of them already, so it's hard to surprise me.

What series do you recommend (question from Krzysztof Lijewski)?

To Lijek ,I recommend  "Californication". There is a story with this series that Lijek has been recommending it to me for a year, he says it's his "Top 3", and I haven't had a chance to see it yet, somehow I'm not drawn to it (laughs).

Thanks for the conversation. Stay healthy!

Thank you, too, and all the best to all the fans, employees of the club. Stay home, take care of yourself at this time!